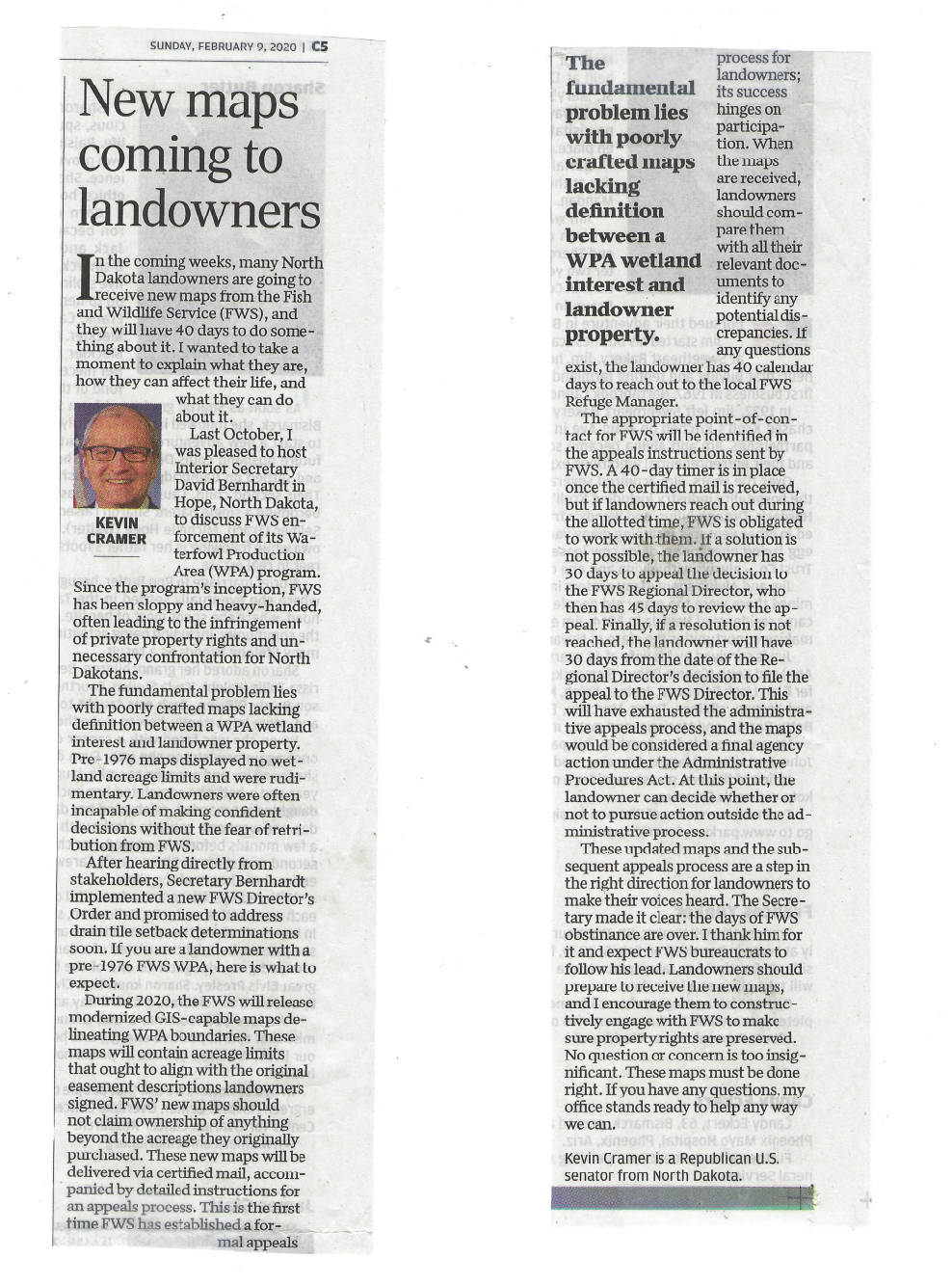 In the coming weeks, many North Dakota landowners are going to receive new maps from the Fish and Wildlife Service (FWS), and they will have 40 days to do something about it. I wanted to take a moment to explain what they are, how they can affect their life, and what they can do about it.

Last October, I was pleased to host Interior Secretary David Bernhardt in Hope, North Dakota, to discuss FWS enforcement of its Waterfowl Production Area (WPA) program. Since the program’s inception, FWS has been sloppy and heavy-handed, often leading to the infringement of private property rights and unnecessary confrontation for North Dakotans.

The fundamental problem lies with poorly-crafted maps lacking definition between a WPA wetland interest and landowner property. Pre-1976 maps displayed no wetland acreage limits and were rudimentary. Landowners were often incapable of making confident decisions without the fear of retribution from FWS.

You have run out of free articles. You can support our newsroom by joining at our lowest rate!
Already a subscriber? Log in or Activate your account.
Loading&hellp

Thanks for being a subscriber.

You have free articles remaining.

After hearing directly from stakeholders, Secretary Bernhardt implemented a new FWS Director’s Order and promised to address drain tile setback determinations soon. If you are a landowner with a pre-1976 FWS WPA, here is what to expect.

During 2020, the FWS will release modernized GIS-capable maps delineating WPA boundaries. These maps will contain acreage limits that ought to align with the original easement descriptions landowners signed. FWS’ new maps should not claim ownership of anything beyond the acreage they originally purchased. These new maps will be delivered via certified mail, accompanied by detailed instructions for an appeals process. This is the first time FWS has established a formal appeals process for landowners; its success hinges on participation. When the maps are received, landowners should compare them with all their relevant documents to identify any potential discrepancies. If any questions exist, the landowner has 40 calendar days to reach out to the local FWS Refuge Manager.

The appropriate point-of-contact for FWS will be identified in the appeals instructions sent by FWS. A 40-day timer is in place once the certified mail is received, but if landowners reach out during the allotted time, FWS is obligated to work with them. If a solution is not possible, the landowner has 30 days to appeal the decision to the FWS Regional Director, who then has 45 days to review the appeal. Finally, if a resolution is not reached, the landowner will have 30 days from the date of the Regional Director’s decision to file the appeal to the FWS Director. This will have exhausted the administrative appeals process, and the maps would be considered a final agency action under the Administrative Procedures Act. At this point, the landowner can decide whether or not to pursue action outside the administrative process.

These updated maps and the subsequent appeals process are a step in the right direction for landowners to make their voices heard. The Secretary made it clear: the days of FWS obstinance are over. I thank him for it and expect FWS bureaucrats to follow his lead. Landowners should prepare to receive the new maps, and I encourage them to constructively engage with FWS to make sure property rights are preserved. No question or concern is too insignificant. These maps must be done right. If you have any questions, my office stands ready to help any way we can.

Kevin Cramer is a Republican U.S. senator from North Dakota.

Be the first to know

We'll send breaking news and news alerts to you as as they happen!

Related to this story

All of America knew that two-thirds of the U.S. Senate was never going to find President Trump guilty of the House Democrats' vague and bogus …

North Dakotans voted to end “dark money” when we approved the Ethics Amendment in 2018. We need to be heard at the federal level, too, and Sen…

This letter is in regards to the letter that was in the Tribune on Feb. 9 where it was stated that President Trump is impeached forever. The H…

Letter: Republicans will have to answer for actions

Incredible. Gutless Sen. Hoeven votes against witnesses. Knowing fair well that any one of these guys the Democratic Senators brought in would…

Letter: Trial was a sham

Shame on Hoeven and Cramer for voting against witnesses in the recent impeachment trial. Over 70 percent of the population wanted to hear from…

Once upon a time, the Republican Party stood for: “Trade, without tariffs” “Christian family values.” “A strong Russian defense,” “Bipartisans…

So much for women seeking equality when a Super Bowl half time performance depicts women as sex toys. And then follow her act with a performan…

Get up-to-the-minute news sent straight to your device.